Nightbanes is a card game. You play matches with cards, using them to defeat your opponents. This page is dedicated to explaining what a card contains. 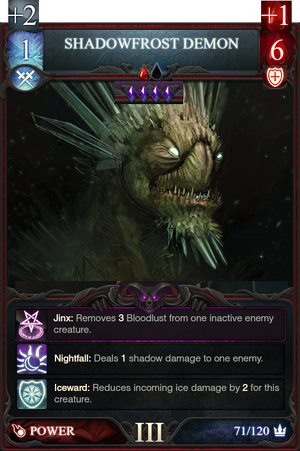 This is a card. It is originally a Shadowfrost Demon, but has been edited for the purpose of showing where the different Icons are.
It will be used to explain the different features of a card.

This is the Name of the card. It is displayed at the very top of the card. All Cards have a name. It is it's identity, and it gives those that know it power over the card (you can search it in the Encyclopedia).

This is the image of the card. It is placed in the center of the card, and takes up half of it.

This is the Rage Value of the Card, or it's attack damage value. It is displayed on the top left of the card. Only Creature cards have a Rage value. The number says how much damage this card will deal on an attack. The background informs you about its Damage School, in this case, Ice.

This Value is the amount of additional attack damage provided by a Weapon or Armor. It is displayed on the top left of the card. Only Weapons or Armors can have this value.

This is the Health Value of the Card. It is displayed on the top right of the card. Creatures, Mounts and Vampire Lords have a Health Value. If a Card's Health is reduced to 0 it is destroyed and leaves play.

This Value is the amount of additional Health provided by a Weapon or Armor. It is displayed on the top right of the card. Only Weapons or Armors can have this value.

If a Creature has this Icon below it's Rage Value, it signals that the creature can wield a Weapon. Only creatures can have Weapon Slots.

If a Creature has this Icon below it's Health Value, it signals that the creature can wear an Armor. Only creatures can have Armor Slots.

This shows the amount of Bloodlust a Creature must accumulate before it becomes active. It is displayed below the Name of the Card. Creatures without this counter are active the turn they are played.

Only Creatures have a Bloodlust Counter.

Abilities are powers that your cards have. They are displayed below the Image of the Card. All cards can have abilities, and most cards have at least one. Read more about Abilities here!

All cards are one of the eight Card Types. The Card Type is displayed in the bottom left of the card. If it is a creature, it will say the Race of the creature instead.

On Creature cards, the bottom left will display the Race of the creature, instead of it's Card Type, implying that it is a creature.

The bottom right of a Card displays its Cardset with a Symbol, atop a colored background which describes its Rarity and in case of Booster Sets, a Number. All Cards are Part of a Cardset and have a rarity.

If the Card is or can be leveled, this symbol is displayed in the bottom, below the Abilities, showing the level of the card. Some Creatures, Weapons, Mounts and Artifacts can be levelled.

If a card is Unique, you can only use it once per Deck, instead of 4 times like other cards.